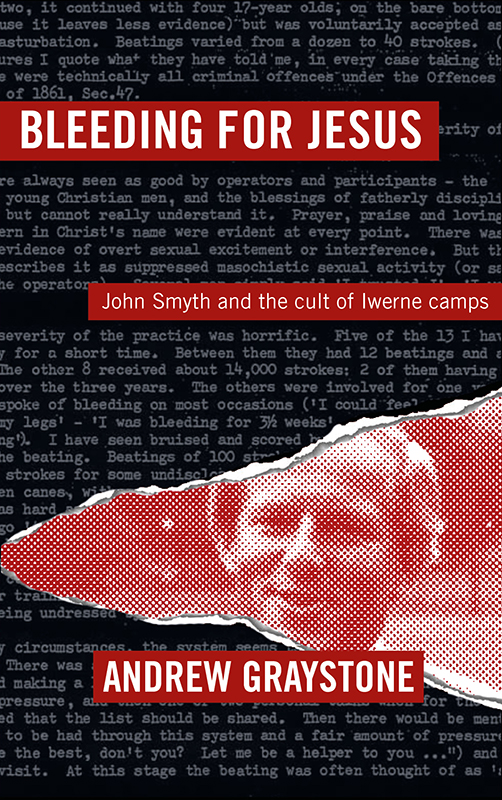 John Smyth and the cult of the Iwerne Camps

‘This is the book that Smyth victims have been longing to see, the story that we have been aching to have told.’

‘Bleeding for Jesus is a disturbing, devastating and damning account of abuser John Smyth. Andrew Graystone has achieved what those in power and authority did not: he has given the Smyth survivors a voice. This is their story, and there couldn’t be a better man to tell it. Tragically, Smyth died before he could face justice but Graystone’s tireless campaign on the victims’ behalf has at least forced the Church to face the truth. Determined not to be a bystander, Graystone instead became the victims’ greatest advocate. This book is a powerful testimony to the survivors’ passion to be heard.’

A Christian barrister and moral crusader who viciously caned young men in his garden shed.

An exclusive network of powerful men seeking control in the Church of England.

A shared secret of abuse that casts a dark shadow over a whole generation of Christian leaders.

This is the extraordinary true story of John Smyth QC, a high-flying barrister who used his role in the church to abuse more than a hundred men and boys in three countries. It tells how he was spirited out of the UK, and how he played the role of moral crusader to evade justice over four decades. It reveals how scores of respected church leaders turned a blind eye to his history of abuse.

Journalist and broadcaster Andrew Graystone has pursued the truth about Smyth and those who enabled him to escape justice. He has heard the excruciating testimony of many of Smyth’s victims, and has uncovered court and church documents, reports, letters and emails. He has investigated the network of exclusive ‘Bash camps’ through which Smyth groomed his victims. For the first time, he presents a comprehensive critique of the Iwerne project and the impact it has had on British society and the church.

Andrew Graystone is a writer, broadcaster and journalist who has written and presented over 1000 programmes and talks for BBC Radios 2, 4 and 5Live. He has written for many national publications including The Guardian, Third Way and the Church Times. He is an academic theologian specialising in theological communication and has written two books, Too Much Information? and Faith, Hope and Mischief. He was the first to bring the story of John Smyth’s abuse to public attention through a series of reports on Channel 4 news in 2017.
ISBNs: 9781913657123 978-1-913657-12-3 Title: bleeding for jesus
Subscribe to the DLT mailing list